The Tyranny of the mean In the early 19th century, astronomers were facing a problem; their instruments were so inaccurate that each time they measured the same thing, they got a slightly different result. To deal with this, they came up with a trick. Repeat the measurement several times, sum the values together, and divide the result by the number of measurements. After this operation, they got a value that was closer to the ‘true’ value they were looking for, the average was born. Soon after, the Belgian astronomer Adolphe Quetelet realized this trick could be applied to any series of numbers and started taking averages over human features. But, biased by his background in astronomy, he started thinking about average human features as ‘true’ values too, like they were feature values of the Platonic ideal human.

Quetelet and his approach quickly rose to fame, and applications of this novel method started to find their way to the real world. During the US civil war, Abraham Lincoln ordered an extensive study of the Union army soldier’s body sizes, and the averages were used to design uniforms and equipment. This allowed mass production of items that were optimal for the average soldier, which, according to Quetelet, also happened to be the optimal soldier. It wasn’t till the 1950’s that the US army started the realize something was off. With the discovery of the jet-engine, airplanes got much faster, but to the US Airforce’s horror, planes began to crash much more frequently without any technical failures. The root cause was eventually discovered by a researcher named Gilbert S. Daniels. He was the first to realize that the plane’s cockpit, designed for the optimal, average, pilot, wasn’t optimal for any pilot at all and that this suboptimal design led to a fatal slowness while operating the new, faster, planes. The solution was to let go of the focus on averages and embrace the variance in pilots’ body features. Cockpits were redesigned with adjustable components so that each pilot could find a comfortable configuration. The fact that your car seat and desk chair are adjustable today can be traced back to Daniels’ revelation.

But what was it precisely that Daniels saw? Why doesn’t the average soldier exist? Let’s take a look at the data and find out! While they abandoned the focus on average values, the US army didn’t stop measuring its soldiers’ body features. And in 2017, they released the ANSUR II dataset, which contains 93 body feature measurements of over 4000 male soldiers.

For simplicity’s sake, let’s focus on just nine features here. When we plot the feature distributions, we can see they all follow normal distributions. 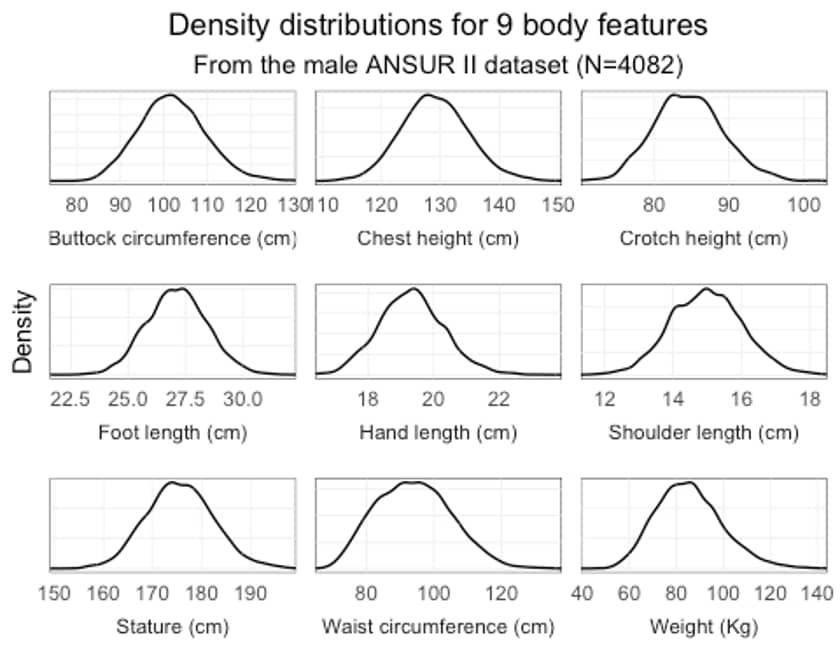 These distributions are pretty symmetrical and tell us that, for each feature, the value that is most frequently measured (the center of the bell curve) is close to the average. Whether we eventually consider a person as ‘average’ for a specific feature depends on how far from the average we allow them to deviate.

Let’s illustrate this for a single feature, body weight.

How average is average?

On average, male US soldiers weigh 85.5 Kg. We could say that all soldiers that deviate less than one standard deviation (14 Kg) from this value are ‘somewhat average’ for body weight, this would be true for 69% of soldiers. The wide, gray area in the plot shows you the weights that fall within this ‘somewhat average’ range. I have a gut feeling that Adolphe Quetelet wouldn’t be all too satisfied with a lot of these ‘somewhat average’ soldiers since most of them have weights quite far from the ‘true’ average value, so a second range was added (dark grey area) with a standard deviation of 0.1. Only 8% of soldiers fall within this range and can be considered ‘super average’ in terms of weight.

We could repeat this procedure for each feature in the dataset, and we’d always find that about 69% fall within the ‘somewhat average’ range and 8% in the ‘super average’ range. This is a property of the normal distribution the data follows.

The assumption that the army designers made was that the 8% super average soldiers are the same for each feature. They are the perfect soldiers in Quetelet’s vision.

Let’s validate this assumption in the data. We’ll check how many soldiers fall within the wide and narrow range of averageness for multiple features.

While simple in nature, averages are tricky and deceptive when misused, the variance in your data is a treasure!

A more detailed version of the story behind this blog post can be found in this excellent podcast and the book The End of Average by Todd Rose.